MUSIC royalty Malcolm Young, the Australian guitarist and AC/DC co-founder, has died aged 64.
Known for the powerhouse riffs and rhythm guitar that propelled the Sydney group to superstardom,
Young had been suffering from dementia for at least the past three years.
He died peacefully on Saturday with his family by his bedside, a statement said.

“Mal always wanted the music to go on,” singer Brian Johnson told Rolling Stone in 2014. “And I’m not going to say no.”
According to Angus Young, Malcolm started battling symptoms of dementia before they made their 2008 album Black Ice,
but he was “still capable of knowing what he wanted to do”.
“I had said to him, ‘Do you want to go through with what we’re doing?’ And he said, ‘Sh*t, yeah.’”

“Renowned for his musical prowess, Malcolm was a songwriter, guitarist, performer, producer and visionary
who inspired many,” the statement read.
“From the outset, he knew what he wanted to achieve and, along with his younger brother,
took to the world stage giving their all at every show. Nothing less would do for their fans.”

Malcolm Young died peacefully on Saturday with his family by his bedside, a statement on AC/DC's Facebook page said.

"As his brother it is hard to express in words what he has meant to me during my life, the bond we had was unique
and very special," Angus Young said.

"He leaves behind an enormous legacy that will live on forever.

Angus Young said it was easy to tell when his brother started slipping.

"Malcolm was always very organised [so] it was kind of strange. For the first time I'd seen him disorganised,
being confused about a lot of things," he said.

"That's when it kind of, you know, hit me. Something was not right with him."

Young is survived by his wife O'Linda and two children.

His funeral was held at St Mary's Cathedral, Sydney on 28 November. 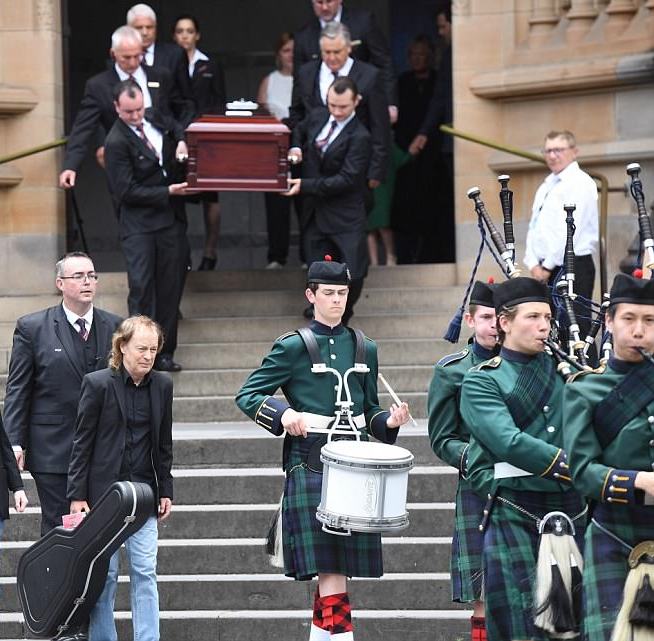