The heart of the band

The heart of the band

AC/DC's Malcolm Young was a master of discipline and economy. 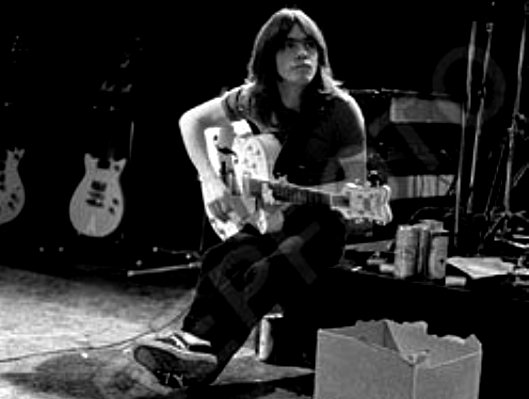 With the departure of co-founder Malcolm Young,
AC/DC have lost more than just a rhythm guitarist,
they’ve lost one of rock’s great forgers of a sound.

It wouldn’t normally be that much of a story: bloke who plays rhythm guitar,
stands at the back of the stage, never says anything, almost never gives interviews
and when he does never says interesting, leaves band. In the hierarchy of rock’n’roll,
the rhythm guitarist is hardly ever the hero: the singer or the lead guitarist swap top position,
the bassist is usually last, and the drummer and the rhythm player swap places
(if the drummer’s particularly flashy, he or she might be perceived as the bigger star).

The rhythm guitarist is the one who does the boring,
unshowy stuff that enables the lead player to unleash those flashy solos.

But that so wholly undersells the role Malcolm Young played in 41 years with AC/DC,
one of the greatest rock’n’roll bands ever, as to be meaningless. Young,
who has now left the group he founded in November 1973 with his younger brother Angus,
was the heartbeat of AC/DC, the very core of the band’s unyielding, unrelenting, implacable throb.

The public face of AC/DC has always been the combination of singer and lead guitarist:
Bon Scott or Brian Johnson with Angus Young. And many people, asked about AC/DC,
would respond with talk of school uniforms, endless solos, and singers with screeching voices
pouring out innuendo.
But what made AC/DC great – and this may sound odd, describing a band whose onstage props
include a giant inflatable woman, firing cannons and the “hell’s bell” – has always been restraint.
Malcolm Young was the master of making as little as necessary do as much as possible.
The band’s music was low input, high impact, so to speak.

Malcolm Young understood that a great riff does not need 427 components to make it great,
that what it really needs is clarity. That meant stripping riffs down rather than building them up,
and it also meant understanding volume. Given how loud AC/DC can be in concert – ear-ringingly,
sternum-shakingly loud – it might be surprising to learn that, in the studio at least,
Malcolm Young favoured quietness: he played with his amps turned down,
but with the mics extremely close. That’s why, on the great AC/DC albums,
you hear not just the chords of the riffs, but their very texture, their burnished, rounded sound.
It’s why AC/DC are immediately recognisable, whether or not you know the song.

Crucial to that is space. The best AC/DC records are the ones where the guitars have room to breath,
where the riffs chop rather than roar, and where the production and recording allow them to stand alone
rather than drowning them in too many overdubs or aggressive mastering
(it’s why for many purists – me among them – the best AC/DC records are those produced by
Harry Vanda and George Young, rather than the smash hits overseen Robert John “Mutt” Lange).

These songs – She’s Got Balls, Gone Shootin’, Live Wire – are not the dumb heavy rock detractors claim.
They’re like perfect equations, beautiful in their formulation and resolution.
Maybe AC/DC are the true “math rock” group, for understanding that maths is about answers,
as well as puzzles.

The utter discipline of the riffs – the only showing off allowed is when it’s time for Angus’s solo,
and on record some of those solos are surprisingly to-the-point – is an achievement in itself.
For all his love of the blues and rock’n’roll records of the 1950s and 60s, and conviction
that they were the bedrock of everything good about rock music, there must have been times
when Malcolm fancied cutting loose. Maybe some arpeggios, or an acoustic guitar intro,
a time signature change … surely he must have toyed sometimes with the idea of showing
The Many Moods of Malcolm Young. But he never did, because AC/DC is a monolith, an edifice,
and once its unity is compromised, it must start to crumble (which may explain why
there’s never been so much as a hint of a solo album from him or Angus).

Oh, Malcolm Young, you will be missed.