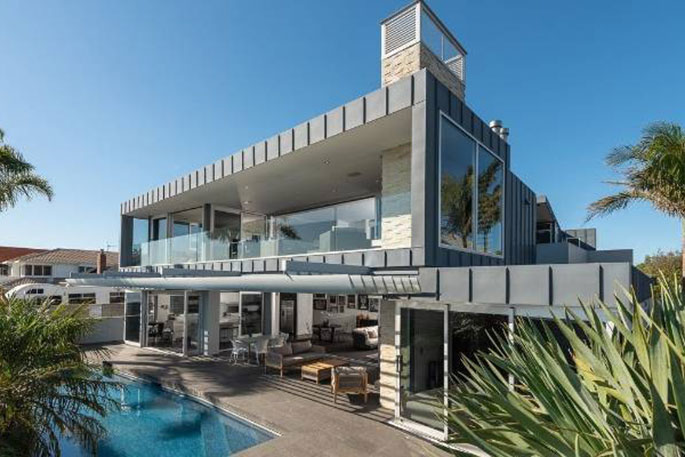 The house, technically two apartments, has been owned and occupied by Rudd for the past nine years
but now he's "ready for something different".

The 64-year-old has become a Tauranga local, having lived in the Bay of Plenty since the early 1980s.
He will stay in the region, but wants looking to downsize a bit, Rudd said in a statement.

It was also the scene of where Rudd hit the headlines a few years ago when he was sentenced
to eight months home detention on drug and threatening to kill charges in 2015.

In 2014 it was reported that property records suggested Rudd’s New Zealand portfolio
and fleet of luxury vehicles alone are worth at least $8 million-$10m.

The property in Otumoetai, Tauranga, is listed on Trademe with a rateable value of $4,050,000.
It has a floor area of 586sqm.
There is a five- car garage, six or more bedrooms, five bathrooms, two kitchens and a swimming pool.

It is walled, gated and described as very private.

And it has incredible views of Mt Maunganui, Tauranga Harbour and Matakana Island from the first floor.

Oliver Road Estate Agents owner Cameron Macneil said that it was "a significant listing,
and the floor area was one of the largest among waterfront residences to become available in recent years.

"Obviously Phil uses them as one large home, but they're quite cleverly designed
to offer privacy and space to the occupiers of each.
We're expecting interest in them both individually and collectively from different purchasers."
Those wanting to view the place would need to prove they weren't "tyre-kickers" Macneil said.
Prospective buyers will need to provide identification and sign a non-disclosure agreement.

The property is being sold by tender and purchasers can submit offers
to purchase one or both of the apartments by December 11.