Richard Ramirez, a transient based in Los Angeles, spent a terrifying portion of 1984 and 1985
slipping into windows and through unlocked doors in California, committing a string of unspeakable crimes
under cover of darkness.
He would be dubbed the “Night Stalker,” as frustrated authorities tried and failed to capture this ghost-like psychopath
for over two awful summers.

But a vicious murder in the city of Rosemead on March 17, 1985, took on special meaning for AC/DC
and its fans after the killer left behind a hat bearing the band’s logo.
Things only worsened when a childhood friend of Ramirez, eventually linked to 13 brutal killings,
said he’d been a huge fan of AC/DC.

By the end of the decade, Ramirez would be sent to California’s death row,
but not before inflicting untold collateral damage on AC/DC, as well.
“I thought it was a joke at first,” Malcolm Young told VH1’s Behind the Music.
“We just thought, ‘This is crazy.’ I mean, why are we connected, anyway?”

As men, children and women of every age were targeted, the connection to AC/DC was never made entirely clear.
Eventually, Ramirez was jailed not only for more than a dozen murders but also a series of convictions for rape,
sodomy, oral copulation, burglary and attempted murder — and his nickname was repeated across the media
like a drum beat: “Night Stalker.”

Of course, that provided another link — though a shaky one — as AC/DC had included a similarly titled track
on its breakthrough Highway to Hell album from five years before.
“That song is not called ‘Night Stalker,'” Malcolm Young said, in a futile reminder. “It’s called ‘Night Prowler’ —
and it’s about things you used to do when you are a kid, like sneaking into a girlfriend’s bedroom when her parents were asleep.”

Still, as the mysterious, shockingly violent spree continued, those two tenuous links to AC/DC became catnip
to a media rabble hungry for a scapegoat to make sense of these senseless crimes.

It was actually Ray Garcia, who grew up with Ramirez in El Paso, Texas, who confirmed that his boyhood companion
followed AC/DC.
That turned into a headlines that read, “AC/DC Music Made Me Kill at 16, Night Stalker Admits,”
“Mass Killer Driven by Rock and Devil Worship” and “Punk and Metal: Some Youths Love Its Violent Side.”
Still another report suggested that AC/DC stood for “Anti-Christ/Devil’s Child.”

The band’s co-founding Young brothers have long asserted, of course, that they chose the name
after they saw those initials on their sister Margaret’s sewing machine.
It actually stands for “alternating current/direct current,” an electrical term.
They thought it was a great symbol for the raw power they hoped this band would possess.
“It’s been called everything since, you know — the meaning of the letters,” Malcolm Young laments.
“You tell them a sewing machine story, and they’re still going to think, ‘no, there’s more to this.'”

Even Ramirez himself, as improbable as it might seem, felt the story cycle had swung out of control.
“The world has been fed many lies about me,” Ramirez said later. “I have read very few truths.”
He added that serial killers are “a product of their times — and these are bloody-thirsty times.”

Ramirez’s first victim actually dated back to April 10, 1984, when a nine-year old Mei Leung was found dead
in a hotel basement near where Ramirez was living.
Later that summer, he killed a 79-year-old who left her window open.
It wasn’t, however, until Dayle Okazaki was murdered — on March 17 of the next year,
the same night as Tsia-Lian “Victoria” Yu — that the AC/DC hat was found.

Los Angeles County homicide investigator Gil Carillo released a photograph of that hat to the press —
setting off a firestorm of speculation and controversy.
“Upon investigating that murder,” Carillo subsequently explained, “one of the pieces of evidence left behind
was a hat bearing the letters ‘AC/DC’ on it.
What the significance was, was trying to get attention through the media —
to see if anybody knew somebody that wore an AC/DC hat.”

From there, as Ramirez continued down a devastating path, AC/DC would increasingly become part of the story.
The band members were as stunned as they were horrified.
“It just sickens you, you know,” Brian Johnson told VH1.
“It sickens you to have anything to do with that kind of thing.”

The bloodshed was just beginning.
An eight-year-old girl from Eagle Rock was murdered three days after Okasaki and Yu.
On March 27, a man was killed, and his wife mutilated.
Six weeks later, Harold Wu was murdered, and his his wife Maxine shot and raped in their Monterey Park home.

And on and on it went, with metronomic, seemingly unstoppable repetitiveness.
An 84-year-old was killed on May 29, 1985, her body — like that of her 81-year-old invalid sister —
scrawled with Satanic symbols.
Ramirez raped a six-year-old in Arcadia one month later, before slitting the throats of two women.
He attempted to beat Deidre Palmer to death on July 5, then succeeded on July 7
with Joyce Lucille Nelson in Monterey Park, before killing a couple in Glendale later in July.
He then murdered a man in Sun Valley, and raped both his wife and son.
Ramirez shot another man and raped his wife.
He killed another man, and tried to kill his wife.

By August 1985, investigators were now connecting Ramirez to another string of crimes further north,
in San Francisco.
That led to their first concrete lead, when a manager of a seedy motel in the Tenderloin district
identified Ramirez as a former guest.
There had been other small breaks along the way.
On May 30, 1985, for instance, Ramirez had raped (but not killed) his victim, giving her a chance to provide enough
details to complete a sketch of the attacker.

None of these clues had the lasting impact, at least in the mind of the public,
as did the AC/DC hat from back in March.
That is, until Aug. 25, 1985, when a witness identified a figure believed to be Ramirez speeding away
in an orange Toyota after shooting still another man and raping his fiancee at Mission Viejo.
A neighbor, thinking Ramirez looked suspicious, jotted down the license plate number.
Once they found the vehicle, a fingerprint analysis confirmed it had been driven by
Ricardo “Richard” Munoz Ramirez.

Police had a DMV photo now, and a name.
Ultimately, however, Ramirez wasn’t undone by smart detective work.
Instead, it was a particularly possessive car owner.
A week following the Mission Viejo attack, Ramirez was apprehended after a scuffle
in the 3700 block of East Hubbard Street in Los Angeles.
He was trying to steal a vehicle when the owner discovered Ramirez — and a fight ensued.
Ramirez ran, but once he was identified as the Night Stalker, a group of residents in this tightly knit,
largely Hispanic area joined together to subdue him.
A makeshift tribute was later erected in East L.A. celebrating these neighborhood heroes.

On Nov. 9, 1989, Ramirez was sentenced to death nineteen times for his role in a total of 43 mind-boggling crimes.
Throughout the trial, Ramirez had played up the scarier portions of his grisly resume, blurting out “Hail, Satan,”
and at one point carved a pentagram into his own palm.
Upon learning of his fate, Ramirez was said to have remarked, “Dying doesn’t scare me. I’ll be in hell. With Satan.”

Ultimately, AC/DC played no role in his conviction.
And yet, even today, their song ‘Night Prowler’ remains inextricably, and they say unfairly, linked to this time —
even if its exact relationship to Ramirez’s ritualistic offenses was never adequately established.
“You know, the sort of people we are, if you were really interested in being devil worshipers,
you would go off and do that,” Angus Young said back then.
“You know, it’s an art in itself. [Laughs.]
And it’s about as a far away from what we are as anything.”

And yet, after the AC/DC hat was found, concerts were canceled as the controversy grew.
Soon, AC/DC was the target of the Parents Music Resource Center, which again focused
on a supposed connection between their music and Satanism.
“The press assumed an awful lot,” Carillo said.
“And the press put a lot more to the significance of the hat than the homicide investigators.”

Rock journalists leapt to AC/DC’s defense, though to little avail.
“It is very hard for me to swallow the widely printed assertion that their very name is some form of anagram
for Anti-Christ,” Billboard’s Sam Southerland said at the time —
adding that he always thought the band’s antics were completely tongue-in-cheek.

Ramirez has since died, but not by government means.
He fell victim in 2013 to liver failure at age 53, having spent the intervening years on San Quentin’s death row.

In the meantime, all AC/DC could do, really, was keep playing.
And so, they did.
But not without the occasional rueful look back.
“I don’t know why they zeroed in on us,” Angus Young added.
“I could never see those connections myself.” 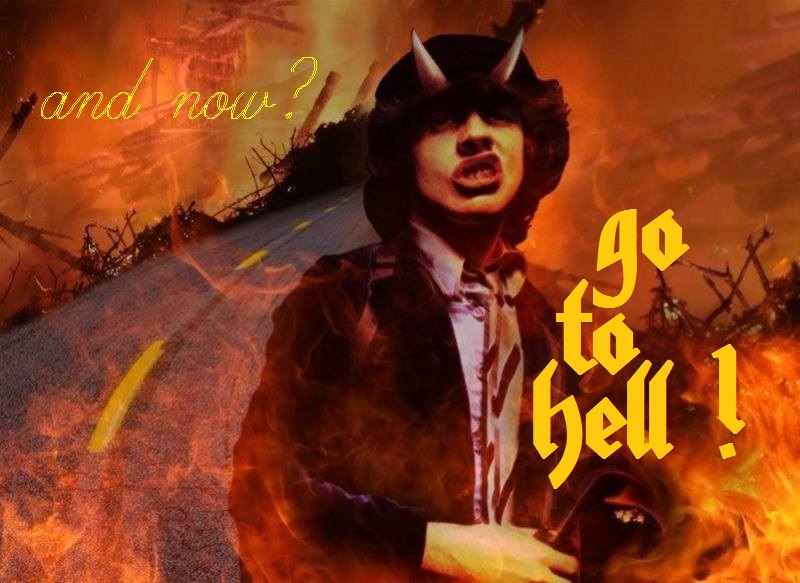 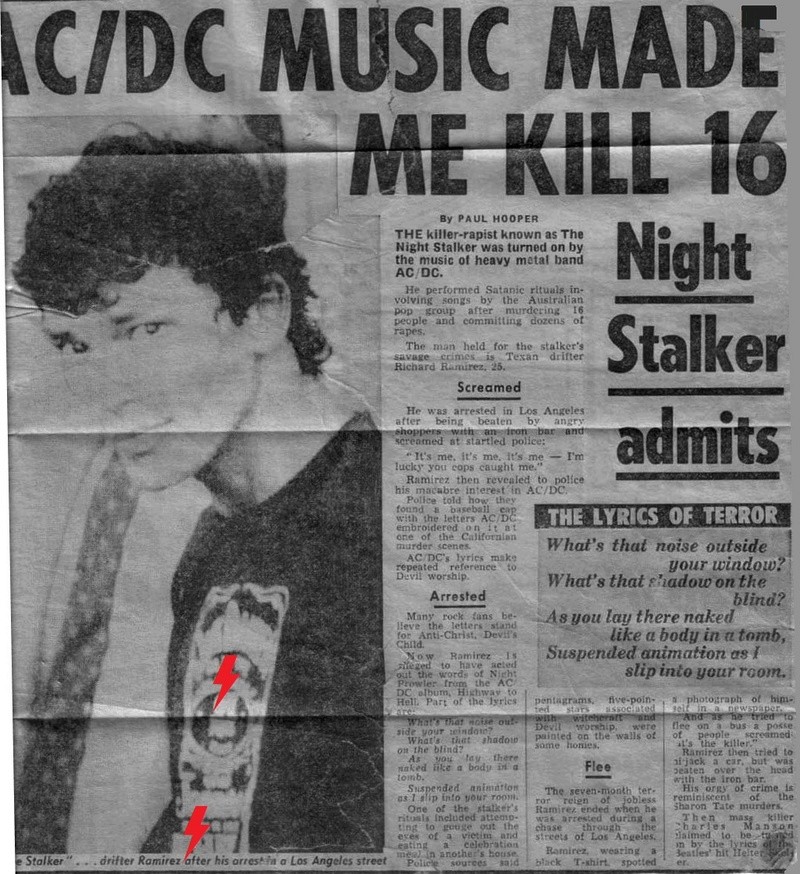